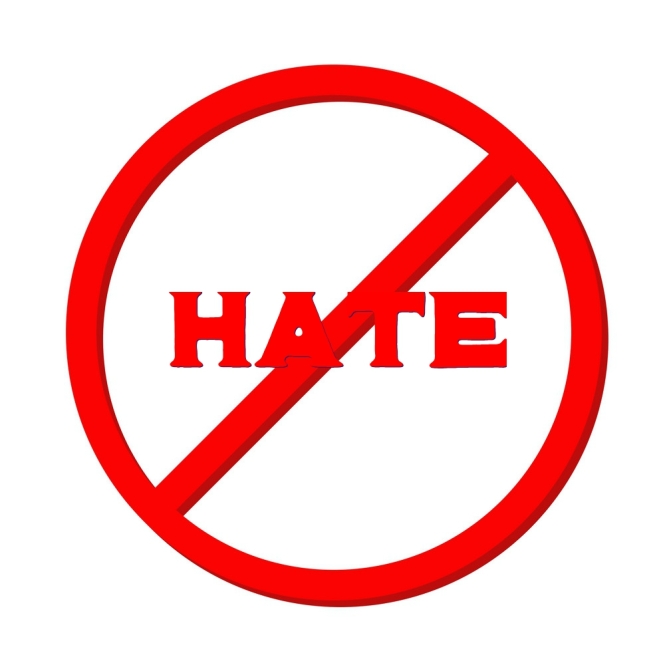 We all who walk the face of the earth, need the Jesus heart for the cure of hate. Mankind can not do this alone, for this is a battle that will need the power and wisdom of GOD the FATHER and HIS beloved son. It is a spiritual battle.

It is not just an emotional thing, it is a battle of good and evil. One that is created by evil through the devil who seeks to divide the people of the whole earth. With countries , families, neighbors, strangers, friends, churches to the point of the members splitting up forming new churches, companies to the point they shut down and people with no jobs. To people who are greedy for wealth and power dividing people too, as they use their power to bully other people.

Hate is destructive 100%. It confuses people by putting thought into their heads that should not be there. Taking away peace of mind if you have it, or not letting you get it if you don’t have it.

Hate is so destructive to the entire world you see and feel the results of it in the NEWS. It affects all people at any given time spreading like a horrible disease of the air. When one person has it for reasons of their own they can pass it on to the children or anyone in their household. Then this is passed onto the people they meet in everyday life.

2 And you were dead in the trespasses and sins 2 in which you once walked, following the course of this world, following the prince of the power of the air, the spirit that is now at work in the sons of disobedience—

Some interesting read at this site on “Prince of the power air” https://www.gotquestions.org/prince-power-air.html

See, the devil causes people to be tempted just like he did with Adam ad Eve. Be aware!

Hate is a horrble disease that eats at the flesh of mankind like any other affliction. We are of the flesh, and weak in the flesh. Hate eats at the one who starts the trouble and passes it to th next person.

If we do not allow GOD and HIS son JESUS into our hearts, who do you think will then influence you in all that you do? You will be lead to destruction with the devil laughing at you as you do. He lost his chance to be right with GOD and was kicked out of heaven because of it. So, do you think out of envy towards mankind that he will want us in it? No, he does not. He will lie to all mankind across the face of the earth to keep the confusion and distruction that you see happening theses days. Most of it is cause by those who do not know what they are doing and do not love GOD.

All that is sacred with GOD, the genders of man and woman as how he created it, where we were born, our families, how we look, marriage to a man and a woman is sacred to those who choose to follow GODS plan. I understand that many people choose not to ion is follow GODs plan. But this is their choice. They can turn their back and do what they want as in the lifestyle of choice. But if they know what GODS plan is and what HE says is sacred then they like the rest of us will have to answer to all that we have done in life when we stand before JESUS. Simple. I do choose GODS plan for me, and I enjoy it with no regrets. Peace and no confusion is good!

The division of people all over the world.

Error: Twitter did not respond. Please wait a few minutes and refresh this page.